Getting to know your Welsh Rarebit.

Its origin lies in Wales and stretches back hundreds of years. It has very little to do with rabbit as the name suggests, much in the way that Toad in the Hole contains virtually no toad.

It might have something to do with a lack of poachable rabbits for a dish. And instead, cheese becomes a tasty base for this toasty wonderment. However Cheese on Toast it is not, and purists will turn purple at the thought of confusing the two!

Nevertheless, no one can deny the dish requires both toast and cheese and fulfils all the requirement of a tasty, quick and let's face it, relatively cheap supper. So here, in the spirit of something warm and comforting this Autumn is the result of our research and trial and tasting... 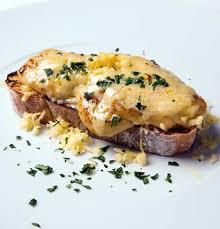